It has been a hectic couple of months and finally a weekend where we didn’t have plans. Unfortunately, Kristy was out of town on a work assignment, but Bandit and I decided to go on a short backpacking trip. Everything was packed and ready to go the night before and we hit the road at 4:30am. We drove north to one of my favorite areas, the Indian Peaks Wilderness. Kristy and I explored this area a little last year and came across a lake around 10,000 feet that was loaded with trout. I found another lake on the map in the same area that I wanted to check out, so Bandit and I headed that way.

We were only going to be staying one night, so I wanted to get to the lake as soon as we could to get some good fishing in. Even though June 21st was the official first day of summer, there was still quite a bit of snow leftover from our record snowfall winter. Bandit enjoyed playing on the snow drifts on the way up and the river provided some background music as it was full of snow-melt runoff and still pretty angry. After a few steep miles, we arrived at the lake. I decided to scout the area out a little before setting up camp and I came across someone fishing. It was still early and the trout were rising all over the lake. He said he had done well all morning on dry flies. Bandit and I found a good camp spot about 20 yards from the lake, dropped our pack and grabbed our fishing gear.

When we got back to the lake, the fish were still feeding and hitting the top of the water hard. I quickly tied on a fly and let some line out. A couple minutes in and we caught our first brook trout of the day. This is a great time of year to fish the high altitude lakes, as most of the rivers are still raging from snow-melt. The lakes have just thawed, wildflowers are in bloom and the insects are hatching. Lots of winter weary fish looking for a good meal. We slowly made our way around the entire lake and lost count of how many fish we caught. Although none were huge, the trout aggressively hitting the flies on top of the water was a blast.

We fished all morning and into the afternoon until the top-water action subsided. Having skipped lunch in lieu of fishing, we made our way back to camp to grab a snack and set up. We had some work to do so we could hit the water again later in the evening. We set up the tent, purified some water, cooled the beer in a snow drift and hung our bear bag. When all that was done, it was time to hit the water again. We fished almost until dark and headed back to camp just before sunset. We put some dinner together and as we were eating a very healthy red fox came out of the brush at the edge of our camp. After Bandit chased him off, it was time to hit the rack.

Yet another early morning and we were on the water before the sun came up. What an awesome place to be with a fly line in the water as the alpenglow lit up the surrounding mountain peaks. We fished for a few hours and then broke camp and headed home. It was a quick, last minute trip, but well worth it. I look forward to exploring more of this area in the near future. 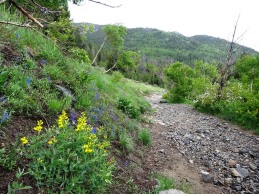 Wildflowers on the trail 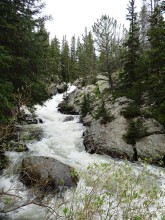 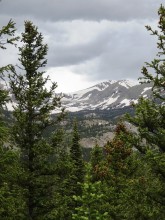 Distant views of the continental divide 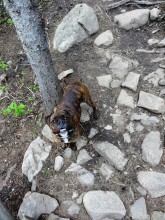 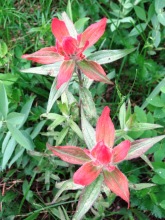 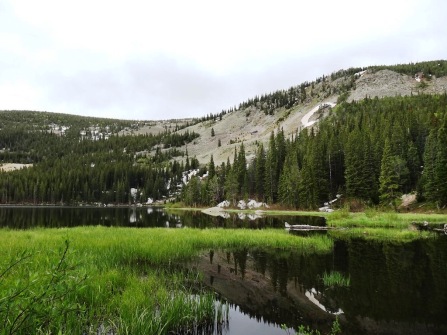 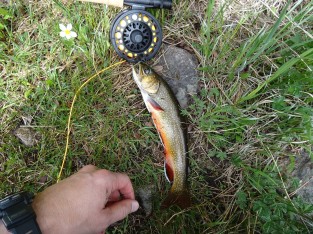 Lazin’ in the sun 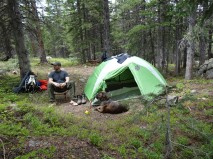 “What does the fox say?” 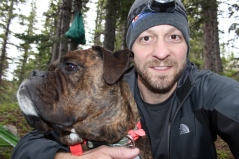 9 thoughts on “Somewhere in the Indian Peaks Wilderness…”