K was feeling lucky, so the weekend of Valentine’s Day, we went to Black Hawk to try our hand at some slots.  We dropped Furry B off at his doggie hotel and headed to the Casinos on Saturday.  Luckily, we booked our room at the Ameristar early, as they were completely full for the weekend.

“Black Hawk, “The City of Mills,” is one of Colorado’s oldest cities.  It is one of a number of towns that grew up in “Gregory’s Gulch,” the narrow ravine where Georgia prospector John H. Gregory first discovered lode gold in the western part of Kansas Territory in 1859.  Within months, thousands of would-be miners poured into the gulch, hoping for more big strikes like Gregory’s.  A few found bonanzas, many found paying claims, but the great majority either moved elsewhere to try their luck or, proclaiming the whole “Pike’s Peak Gold Rush” a hoax, went back to their settled lives in the States.”   www.cityofblackhawk.org

Black Hawk and it’s neighboring Central City enjoy a rich and diverse history.  Founded during the mining boom with promising futures, one burnt to the ground early on and both declined in the 20th century.  In 1991 gambling was introduced and the towns were revived.  There are more casinos in the area than in Atlantic City, NJ.  With the legacy of the old west and unique architecture, it is an interesting history lesson where you can win some money also…

We stayed at the Ameristar, which is the tallest building in the state west of Denver.  It opened in 2009 and is the largest and most  popular casino in the Black Hawk and Central City.  We stayed on the 32nd floor which boasted amazing views and one floor above us was the rooftop pool and hot tubs.  We checked in, dropped our bags off in our room and checked out the hotel.  After we walked around, we had lunch at the Fireside Kitchen.  K had bacon corn fritters with an avacado, cilantro, ranch dipping sauce.  Yea, they were as good as they sound, I know you are drooling…    I had a chili smothered angus burger, which was also very good.  After getting our fill, we headed to the game floor.  We walked around checking out the games trying to decide where to start.  With two full floors, there was every slot you can imagine and plenty of poker, craps and roulette tables to choose from. 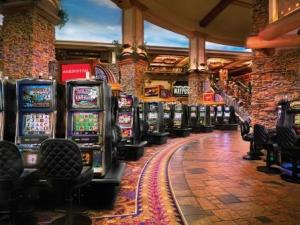 With the hotel being full, we thought it would be very crowded on the game floor, but suprisingly it wasn’t.  There were plenty of games (not $$) to go around.  K is more lucky than I am and we came out a little ahead of what we planned to spend.  All in good fun.  After we decided to quit while we were ahead, we ate dinner at the Timberline Grill.  K had a chicken caesar and I had a chicken breast, roasted in herbs with a herb goat cheese crust and port wine demi-glace.  Everything we ate at the casino was excellent.

After we called it a night with the games we headed up to the rooftop pool area.  We relaxed in the outside hot tubs and debated on whether the casino games are smarter than we are…  We got up and left the next morning and headed back to Denver to pick up Furry B.