Every Fall we always try to take at least one day trip to find Aspen gold.   This year we found an offroad trail with a little challenge and a little scenery — Georgia Pass.   This pass connects the towns of Jefferson and Breckenridge and was once a late 1800’s stagecoach trail that carried passengers from the Jefferson railroad terminal into Breckenridge and surrounding communities.

We decided to enter the trail from Tiger Road just outside of Breckenridge, since this section of the pass was the most difficult. This part of Summit County used to be an active mining area and home to many small mining communities that have long since disappeared.

Our ascent up Georgia Pass was steep, narrow, and rocky.  There are numerous spurs off the main trail, which can make the trail somewhat confusing to follow. The road is marked with forest service road markers, but they can easily blend in with the dense trees and brush.  If you go, just be sure to follow 355 signs. 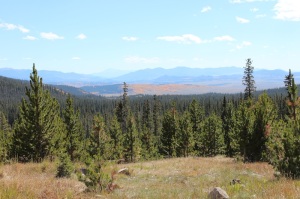 After emerging from the narrow trail, we drove past tree line and were greeted with a magnificent view.  We were slightly disappointed that we had yet to see any Aspens, but once we reached the top of the pass, we were able to see the gold foliage awaiting us on the other side.

Descending the pass towards Jefferson, the road is well maintained and easily traveled by all vehicles….And is surrounded on either side by glowing Aspens.

Contrast of the golden Aspen leaves against the Colorado blue sky.

The golden leaves continued around every corner. 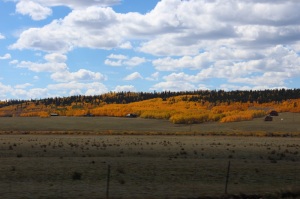 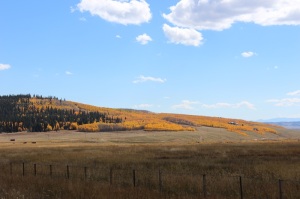 Lucky folks to live amongst the Aspens. 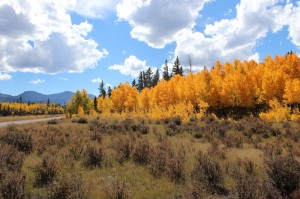 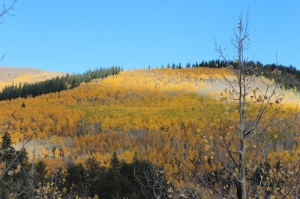 Once we finished Georgia Pass, it was still early in the day, so we continued down the highway and explored a portion of Weston Pass.  We found a few more amazing displays of fall color.

If you are curious about the history of Breckenridge and Summit County, here are two interesting websites: 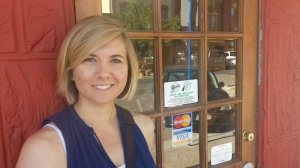 Kristy at Shooters in Rifle, CO. Note the sticker on the door.

Driving I-70 west on a holiday weekend is a daunting task, so we left promptly at 6am on Saturday to get ahead of the traffic. We had plans to spend the Independence Day weekend with family in one of our favorite Colorado destinations, Meeker, for Range Call 2014. After our 3 hour drive, we stopped in to have breakfast and to support a local restaurant, Shooters Grill in Rifle. They recently made headlines for allowing employees and patrons to “open carry” firearms. Kristy ordered a breakfast burrito the size of a football, which she barely touched, and I had Angus corned beef hash and eggs. Breakfast was excellent and up the road a ways, we arrived in Meeker just in time to catch the parade. After watching the parade in the hot sun, we welcomed the shade at the BBQ afterwards hosted by some friends of the family. We relaxed and visited with some great people and chowed down on the never-ending buffet of fresh barbequed pork and lamb and every side dish, salad and dessert you can imagine.

The hosts did it up right and spared nothing. From the kegs of beer and fresh lemonade and tea, to the tents and tables sitting on the freshly manicured lawn right on the White River. It was one of the better 4th of July BBQs I have been to.

Rejuvenated from the food and cold drinks, we made our way over to Main Street to watch the reenactment of the famous Meeker bank robbery that took place on October 13th, 1896. With the help of the 100 year old Meeker town historian, every year a group of locals acts out the bank robbery in front of the Hugas Building next to the Meeker Hotel. 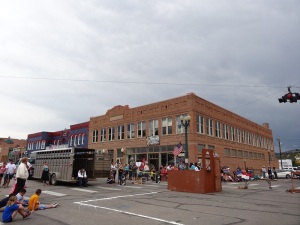 Using authentic props and a little humor, this historic gunfight plays out in the same location it originally occurred almost 120 years ago. There have been a few minor changes since then; the streets are now paved, a few buildings have gone up and the three would be robbers have a permanent view of their mistake from the cemetery above town. An affirmation to this day as to why our 2nd Amendment is so important.

What would the 4th of July be without fireworks? The festivities came to a close with a great fireworks show that we were lucky enough to watch from Linda and Joe’s deck. What a perfect setting with the Grand Hogback mountains as a shadowy backdrop.

We always hate to leave Meeker, but the time had come. We ate breakfast with the family and hit the road taking a different route home on Highway 82 in Glenwood Springs and then through Aspen. Leaving on a Saturday we were not in a rush to get home, but we didn’t want to push our trip into the madness heading back to Denver on Sunday. The plan was to drive over Independence Pass (on Independence weekend) and into Leadville and then on to Denver. On our way up the pass, we stopped at the ghost town of Independence. It is one of the better preserved ghost towns in the state and yes, it got its name because gold was struck there on July 4th, 1879. In its heyday it had 1,500 residents, 47 businesses and 5 saloons. After producing $190,000 worth of gold, the winters became too much for the miners and many relocated to the newly named Pitkin County seat, Aspen; and by 1912, Independence was completely deserted. The Aspen Historical Society has done a great job restoring and maintaining what is left of the ghost town. They even restored the old general store and turned it into a small museum with mining artifacts and old photos of Independence. Of course the intact buildings are boarded and locked up in winter, as the snow all but covers them.

The last time we drove Independence pass was a few years ago and it was the weekend it had re-opened for the season. You could barely make out the rooftops of the mining remains at Independence, there was a lot less snow this time… (Pics below are of the exact same sign). 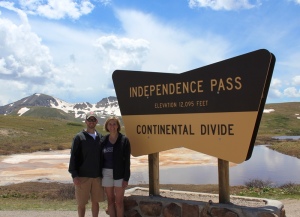 We descended the 12,095 pass into the twin lakes area and headed north to Leadville. Leadville is another mining town that was founded in 1877 and is still a very active town with about 3,000 residents. It is the highest incorporated city in the United States at 10,152 feet. As Denver is known as the Mile-High City, Leadville’s nickname is the Two-Mile-High City. The Historic District boasts some awesome 19th century architecture and the detail and craftsmanship is amazing. Leadville is home to some notable historical structures such as the Tabor Opera House, the Delaware Hotel (supposedly haunted) and the Silver Dollar Saloon, where Doc Holliday is said to have had his last gunfight before his passing in Glenwood Springs, CO of tuberculosis. Leadville is a really cool town with a lot to do and it is surrounded by some of Colorado’s highest mountains (Mt Elbert and Mt Massive). After a quick bite to eat at High Mountain Pies, which we highly recommend, we headed back to the Mile-High City. 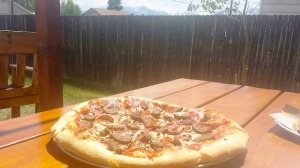 High Mountain Pie with Mt Elbert in the background.

See ya in the mountains!